Initiator Pharma - LINC onboard and rotation toward fair value should start now.

Initiator Pharma was founded in 2016 as a spin-off from Danish listed company Saniona. This was done on the initiative of the people who are currently part of the management team and who saw the potential to develop drug candidates with unique characteristics, known as monoamine reuptake inhibitors (MRIs).

Initiator focuses on targets within the central nervous system with projects where the risk is already reduced via associated preclinical and sometimes clinical data. At present, priority is given to IPED2015 and IP2018, and to IPTN2021 within trigeminal neuralgia. The assets have the potential to become first-in-class/best-in-class.

Initiator Pharma has two projects in Phase 2, IPED2015 and IP2018, that are being developed to treat patients with erectile dysfunction (ED). ED is a mass market that currently lacks effective treatment options for millions of men, despite the fact that well-known drugs such as Viagra (PDE5 inhibitors) from Pfizer have long been available.

Most interesting in Q1 2021 was the announcement of a project portfolio expansion with IPTN2021 (a new formulation of IPED2015) in trigeminal neuralgia. This is an indication in severe pain where there are currently no effective treatment options. A Phase 1b trial is expected to start this year, with results in 2022. We see significant potential for IPTN2021 and will provide a more detailed view of the project.

Erectile dysfunction (ED) is the most common sexual medical condition for men, and global incidence is expected to rise to 300 million cases in 2025. It was a long time before ED (formerly called impotence) was given a clear definition, and it was previously regarded by doctors as a lifestyle problem. Today, however, it is described as the inability to achieve an erection or maintain an erection long enough to satisfactorily complete sexual activity. ED has shown a clear correlation with age in epidemiological studies.

IPED2015 is being developed as a new oral treatment for erectile dysfunction, and more specifically is targeted at men with organic ED. Unlike established treatments, IPED2015 has a double-acting mechanism in both enhancing the desire to have sex and strengthening blood flow to the penis.

Professor Ulf Simonsen identified the potential of IPED2015 as a possible new treatment for ED during his research into the field. IPED2015 has undergone extensive analysis and has been selected from among 200 analogues based on the best properties to amplify natural erection signals that occur during sexual stimulus (such as touch of the penis, scents, memories or visual impressions).

IPED2015 belongs to a class of drugs called monoamine reuptake inhibitors, and acts on three neurotransmitters (dopamine, serotonin and noradrenaline) in the central nervous system. The molecule has the strongest binding to, and inhibition of, dopamine transporters (DATs), which act to reuptake released dopamine at the synaptic cleft. By inhibiting this process, dopamine levels can be kept higher and thus strengthen the erogenous and sexual signals in brain and nerve cells.

In August 2018, the clinical development of IPED2015 began and a phase 1 trial was initiated which was successfully completed and ended almost a year later. Immediately after the end of the phase 1 trial, phase 2a began with the aim of obtaining an initial indication of efficacy in men with severe ED.

The phase 2a trial was an exploratory proof of concept that included a total of twelve men with ED. One inclusion criterion was that participants had a score of less than twelve on the IIEF5 scale, meaning patients with moderate to severe ED. These are patients who usually respond poorly to treatment with PDE5 inhibitors.

This was a crossover trial, where the participants formed their own control group. Initially, half of the patients were administered IPED2015, and the rest received a placebo. The treatment was monitored for 24 hours at the clinic. At least five days __later, the groups were switched and those who initially received the placebo were given IPED2015 and vice versa. The end point was to measure stiffness in the penis. Participants in the trial were each shown into a room where they were administered a dose and left to watch an erotic film. A Rigi Scan instrument was used to measure whether or not an erection was achieved, which is a well-established method to objectively measure stiffness in the penis and uses a strap stretched around the penis and connected to the system.

The results of the phase 2a trial showed statistically significant treatment efficacy for IPED2015 compared with a placebo (p<0.05), where 25 percent (three) of the patients achieved the endpoint. The trial also measured statistically significant efficacy for IPED2015 compared to a placebo in stiffness and swelling, measured with RigiScan and using Rigidity Activity Units (RAU) for stiffness and Tumescence Activity Units (TAU) for swelling.

_The latest project to be added to Initiator’s pipeline is IP2018, which was acquired by Saniona in early 2020 and also has a history with Neurosearch, where it was designated NSD-788 (also NS9588). IP2018 was developed at Neurosearch as a new treatment for depression and anxiety, and two phase 1 trials were conducted __for this indication. Following the acquisition, Saniona retains some ownership of the project and has rights to 20 percent of future revenues to Initiator and a single-digit royalty (we guess 2-3 percent) based on product sales. _

Like IPED2015, IP2018 is a monoamine reuptake inhibitor. Its main focus is on the serotonin system, but it also inhibits dopamine reuptake. The project is different from IPED2015 and is being developed as a new treatment for individuals with mild to moderate depression with psychogenic ED.

Initiator has conducted its own studies in animal models for depression which show that IP2018 has an antidepressant effect and a positive effect on erectile function. The results showed a dose-dependent efficacy, and that the substance can have an antidepressant effect and strengthen erection within a single administration range. These trials compared IP2018 with drugs including Cipramil (citalopram hydrobromide) from Lundbeck, where it showed better or equivalent efficacy in mouse models for depression. Effects on ED have been shown at low dose levels.

Depression and anxiety can cause ED and, in addition, treatments for these conditions often have a negative effect on ED. Prescribing of antidepressant drugs is high and they constitute among the most prescribed drugs in Europe and the United States. A significant proportion of today’s established treatments show a negative effect on sexual desire and/or sexual arousal.

Recruitment has begun for phase 2a

Screening of patients began in early October 2020 for a phase 2a trial to be conducted in the UK at MAC. The trial will include 24 patients divided into three groups, two with different doses of IP2018 and one receiving a placebo. This will be a randomized, double-blind crossover study, the same as for IPED2015, where participants can also be regarded as their own control. The main purpose is to evaluate the efficacy, and we expect a similar procedure to the phase 2a trial with IPED2015. The main difference in this study is that the individuals to be recruited are younger and show mild to moderate depression. The age range extends between 18-55 years. The recruitment of patients has to date been affected by the Covid-19 pandemic, and there is therefore a risk of delays. However, the plan is to be able to complete the trial end of H2 2021.

If the outcome is positive, the next step will be a phase 2b trial. We believe the main focus to be psychogenic ED, but a potential licensing partner may see the greater potential to also develop IP2018 as a new drug for the treatment of mild to moderate depression.

Recently added to the project portfolio expansion. This is an indication in serve pain where there is currently no effective treatment option. A phase 1b trial will start this year with result in 2022. More info will be provided after phase 1b trial. 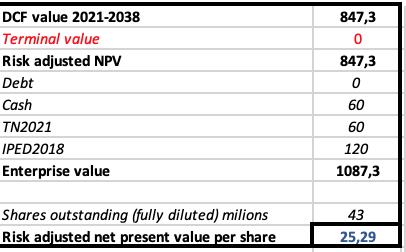 Stock is currently trading at 5kr (21/7-2021). Valuation suggests 21kr/share, a significant upside potential with only IPED2015 taken into account.

Using same methodology as IRLAB (CNS studies) which is conducting two studies in phase 2b.

Disclamer: I do own shares in the company. This is not a stock recommendation.