Looking at the top grossing ranking for G5 Entertainment’s major revenue contributors in Q1 we believe the decline in revenue will continue. But it comes with a twist, currently our data shows Hidden City is bigger in Japan than in the US. The solid performance for Hidden City in Japan will likely help with a higher revenue per paying user. As we have stated before we think the investment case is about profitability not growth the upcoming 12 months. However, we have lowered our short- term expectations especially on revenue.

The negative momentum in the G5 stock has continued in 2019. While the stock market has rallied this year (OMXSPI is up 16% and Nasdaq is up 20%) stocks in G5 is down another 17%. Top grossing ranking tells us the same story as before. The trend for the company’s biggest revenue contributor Hidden City is still in decline. According to our model, the most interesting number to look at is how Hidden City is performing on iPad in the US. According to our sources, the average top grossing ranking for Hidden City was 45 in Q4 2018 and 55 in Q1 2019. The company’s second biggest title Mahjong Journey is still a solid performer with a top grossing rank of 95 in the US on iPad.

However, the game seems to perform very well in Japan. In Q1 the top-grossing ranking is better in Japan than in the US. Japan has the highest revenue per user in the world, and the mobile games market is the same size as in the US. On the iPhone, the difference is even bigger between Japan and the US. The average top grossing ranking in Q1 2019 was 120 in Japan and close to 200 in the US. This means monetization per paying user can improve even more during the quarter, which of course is a very positive trend for our profitability case in G5. The company reports “Monthly Gross Revenue Per Paying User” (MAGRPPU) this number had a yearly growth of 5% in the last quarter, which means every paying user paid an average of USD 44.7 each month in G5’s games.

The most interesting number in the Q1-report will according to us be user acquisition costs (UAC) in relation to net sales. Both 2017 and 2018 the company showed explosive revenue growth, in 2017 UAC as a percentage of sales was 28% in 2018 this number had dropped to 26%. During 2015 and 2016 this number was around 20%. We believe our estimate of UAC (% of total sales) of 23% is a rather conservative number. We can assume the competitive landscape is fiercer than three years ago, but still, we believe marketing efficiency can surprise positively.

If G5 manage to squeeze marketing costs and maintain an acceptable level of revenue this proves G5 has a game portfolio of high quality which of course is an important indicator for how strong the company’s long-term competitive advantages is. 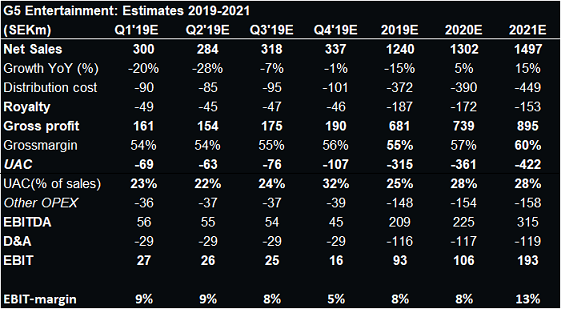