Karolinska Development reported the result from Q1’19 this morning. We give our take on the report.

Thus, the financial situation remains strained for Karolinska Development. Management reports that discussions are being held with Sino Biopharmaceutical (the largest shareholder of the convertibles in Karolinska Development) with the aim of implementing an offset issue to the company. Further, Karolinska Development reiterates that a rights issue might take place in the second half of 2019. According to management, the aim is to be able to present a solution on the annual general meeting (held on the 26th of June), and we will, therefore, await further details until we give an in-depth view of Karolinska Development’s portfolio holdings.

Overall, the report was in line with our expectations, and with only minor dilution effects in their holdings. 2019 has so far been eventful; while we learned about positive news from Aprea and Promimic, among others, the failure of sevuparin (Modus Therapeutics) in sickle cells disease was a major setback (see our last comment for our take on recent events). Further, OssDsign reported that the outcome from the share issue prior to its listing on Nasdaq First North was oversubscribed (see our subsequent comment from today). We will, however, only perform minor changes to our estimates following today’s report, however, and our valuation, therefore, remains unchanged (see SOTP figure below, WACC of 16%). Next, we await how the discussions regarding the financials will materialize. 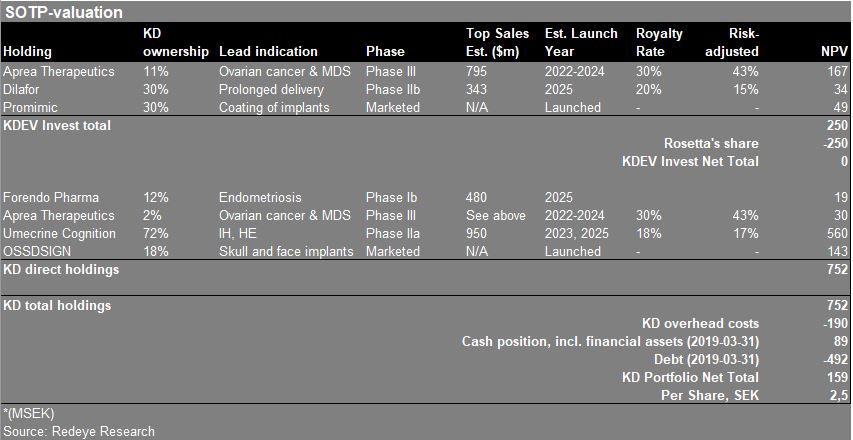