The annual meeting of the annual meeting of the American Society of Clinical Oncology (ASCO) is now over. No major, practise-changing advances were seen in colorectal cancer (CRC), but we saw some interesting results in the early stage pipeline and will monitor the development going forward. Overall, we continue to view Isofol’s competitive landscape as favourable.

The investigator-sponsored phase Ib trial REGONIVO (link) evaluated a combination of the tyrosine-kinase inhibitor (TKI) regorafenib and the immune checkpoint inhibitor (ICI) nivolumab. Results demonstrated a promising anti-tumour activity in microsatellite stable (MSS) CRC – a patient group that until now have not seen any treatment benefit with ICIs. While some synergistic effects have been shown in early stage trials with PD-1/L1 blockade and therapies with anti-angiogenic activity (such as regorafenib), we are somewhat surprised by the high number of responders in REGONIVO.

Regorafenib was developed by Bayer and was approved in 2012 for use in patients with chemorefractory mCRC. The therapy is an oral multi-kinase inhibitor that targets angiogenic, stromal and oncogenic receptor tyrosine kinase (RTK). Since launch, Bayer has been struggling to position itself against competing products and the uptake has been relatively slow. Although no proof-of concept has been established in MSS CRC and GC, the company might have gotten lucky with the results from REGONIVO.

The REGONIVO trial was a dose-finding study that recruited 50 patients with advanced or metastatic CRC (mCRC) or gastric cancer (mGC) who were refractory or intolerant to standard chemotherapy. Overall, the trial demonstrated an impressive objective response rate (ORR) of 40% and a disease control rate (DCR) of 88%. Median duration of treatment was 0.7-14.9 months and three dose limiting toxicities (DLTs) were seen (all grade 3). 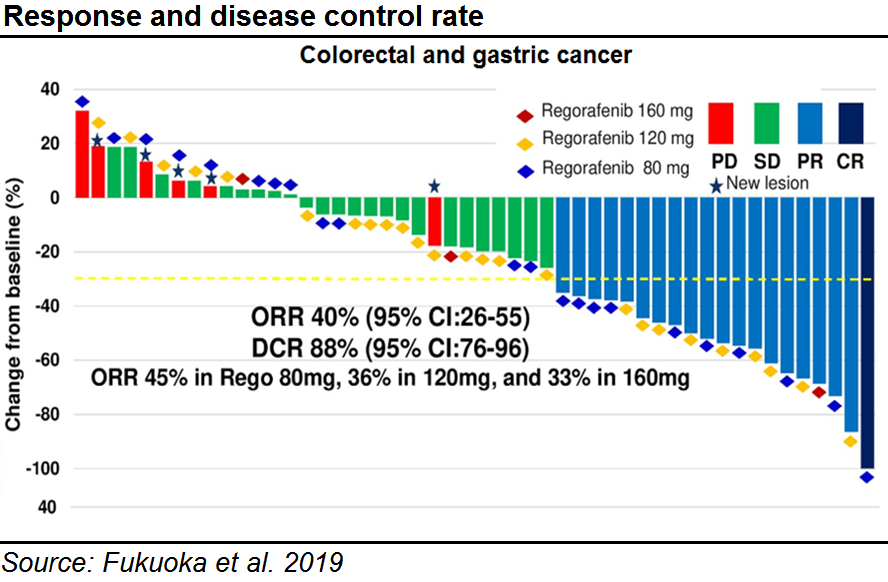 For patients with CRC, the combination therapy demonstrated an ORR of 36% (9/25). More importantly, all except one patient had MSS cancer among those that responded to therapy. Median PFS was 6.3 months. GC patients seemed to have a higher chance of responding to treatment. In total, 11 of 25 responded to therapy (corresponding to an ORR of 44%) and one complete response (CR) was seen. Among the responders, 3 of 11 (27%) were refractory to anti PD-1/L1 therapy. Median PFS amounted to 5.8 months. 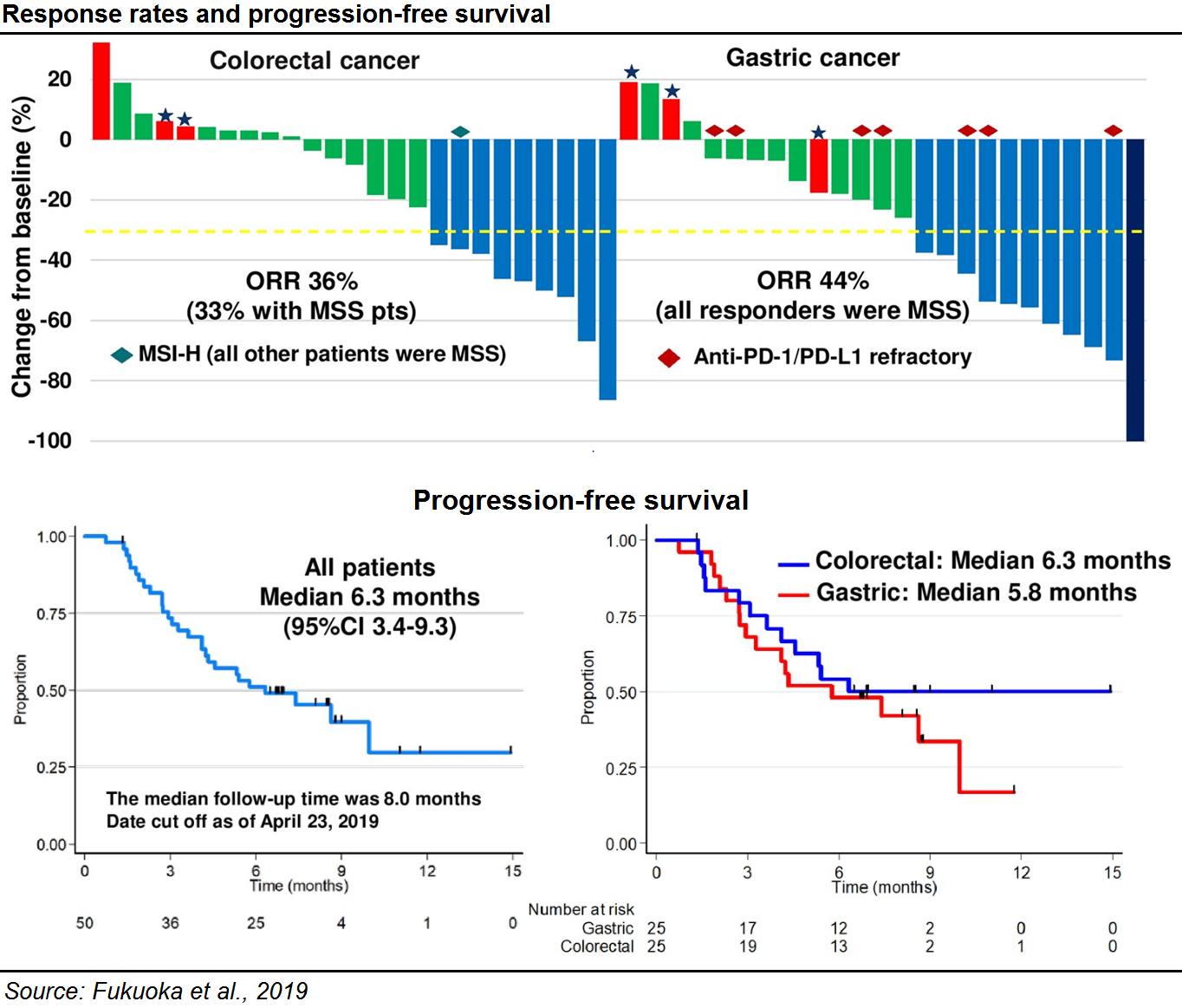 Despite this, we find the seemingly strong anti-tumour activity in MSS CRC somewhat surprising. The clinical trials in HCC and NSCLC have mainly been the result of an “add-on” logic. Further, we recognise that the relatively modest single agent activity of regorafenib and lack of activity of PD-1/L1 inhibitors in CRC. In the pivotal trial with regorafenib in CRC, the therapy showed a disease control rate (DCR) of 41% (with a 1% partial response rate) and an improvement of overall survival of 1.4 months (6.4 vs. 5.0).

The presented results therefore suggest that regorafenib could have a high immunomodulatory activity in CRC and GC. Given the low PD-L1 expression and immune cell infiltration among MSS patients, the data indicates that the drug could reprogram the tumour milieu. While the mechanism of action differs slightly between regorafenib (which targets VEGFR2-TIE2 tyrosine kinase) and angiogenesis inhibitors (which usually targets VEGF-A), the results are consistent with previous studies, showing that the angiogenesis inhibition decreases the presence of immunosuppressive immune cells in the tumour microenvironment.

Taking this into account, as well as research has indicated that VEGF inhibition might only be effective in a specific step in the cancer immunity-cycle, we recognise that we are still at an early level of understanding of how anti-PD1 and TKI therapy should be combined. It should also be noted that the patient sample was small and that the trial is conducted at a single Japanese clinic. Nevertheless, the results do indicate that the activity of PD-1/L1 inhibitors can be increased in MSS patients and we will monitor the development going forward.

More data emerged from the phase I trial (link) with Amgen’s KRAS G12C inhibitor (AMG 510) during the conference. In the updated results, investigator Marwan Fakih presented the results for 29 evaluable patients with CRC, non-small cell lung cancer (NSCLC) and appendix cancer. While the results for patients with NSCLC improved from what was seen in the abstract, data for CRC patients were less promising. Furthermore, we recognise that the KRAS G12C occurs in a minority of CRC cases (about 3%).

In the presentation, Fakih detailed the treatment outcome for 29 patients with KRAS G12C-mutated cancer (18 with CRC) after 6 weeks of follow up. All patients had received at least 2 prior lines of therapy and at the cut-off date 9 patients had discontinued treatment (all due to progressive disease). Among the patients with CRC/appendix cancer, the duration of treatment ranged from 7.3 to 24 weeks.

As seen in the abstract, the efficacy in CRC appeared to be lacklustre. There were 14 patients with CRC/appendix cancer that achieved stable disease (SD), but no objective responses were seen. It should, however, be noted that only one patient had received the highest dose and that most patients received lower doses. Since the safety profile was beneficial (no treatment related serious adverse events were seen), we see it is likely that higher doses will be tried going forward. 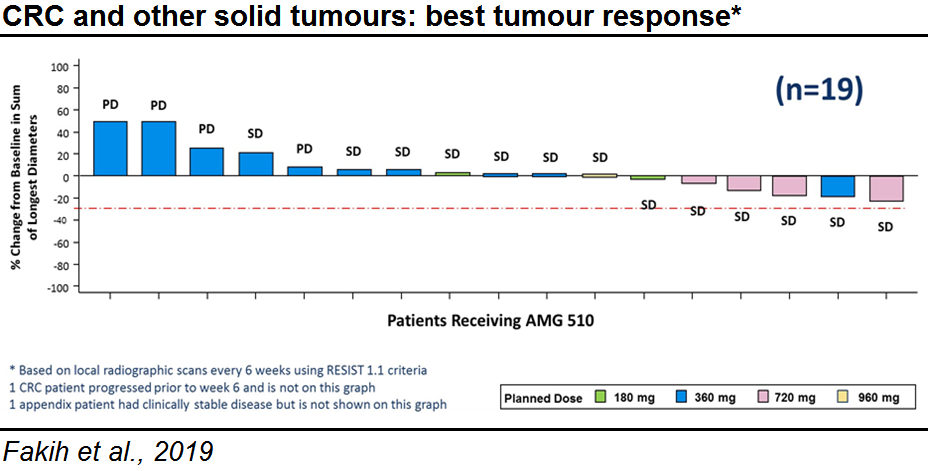 NSCLC patients saw a significantly better treatment outcome. In the updated results, 5 of 10 patients had a PR and 4 more patients had SD. Among the patients that had PR, 3 received the highest dose, perhaps giving a hint of the dose-response. 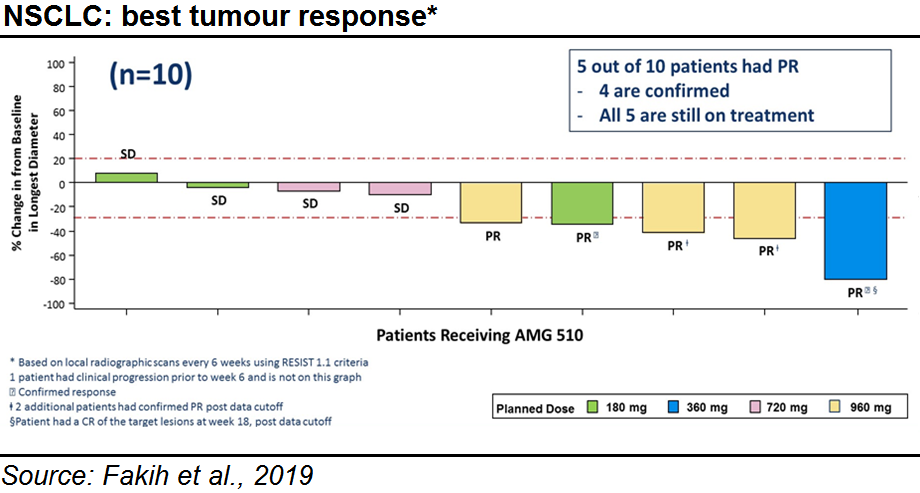 Although the results are early and few patients have been included, the difference seen in response rates between NSCLC and CRC patients (as well as GC and CRC patients in the REGONIVO trial), could be yet another validation of how tough CRC is to treat. Similar findings were recently seen in BRAF-mutated cancer, where melanoma patients had significantly better results than CRC patients when treated with BRAF inhibitors.

Amgen has an outspoken plan to combine their drug candidate with a PD-1/L1 inhibitor, which could result in an improved efficacy. It was also pointed out during the panel discussion after the presentation that other combinations, such as with therapies targeting the MAPK/ERK pathway, also could make sense given their high activity in CRC.

However, in order to target the MAPK/ERK pathway successfully, studies have shown that a combination of anti-BRAF, MEK, and EGFR therapies is necessary. While a quadruplet combination therapy might be a step forward, we recognise the complexity of the approach and believe that designing clinical trials and pricing will be a challenge.