We have revised our near term financial forecasts on the back of lower order bookings and some recent hesitation to investments in the sawmill industry.

On group level the Q3 numbers released last week did not deviate too much from our estimates. We certainly expected higher gross margins, which were negatively affected by product mix and some further cost over-runs in fixed price projects. However, lower opex basically made up for the difference. 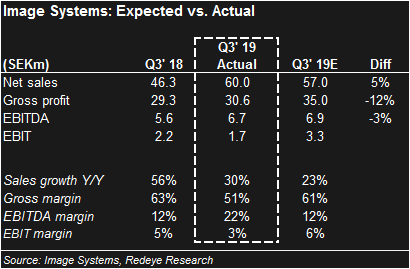 We were hoping to see better margins in RemaSawco. In spite of much higher sales, EBITDA was flat Y/Y. And according to the report Q3-earnings include a positive one-off related to the purchase of Finnish subsidiary Limab OY last year. This amount is not disclosed but obviously the adjusted earnings are lower than reported. RemaSawco is taking further action to make sure that costs in fixed price projects are contained.

Motion Analysis continues to perform well. Sales were a little lower this quarter but EBITDA still beat our forecast. Their pipeline of new products and upgrades is reassuring and we don’t pay too much attention to the quarterly sales trend. The client base is wide and a large part of their business is repeat orders, with limited cyclicality. Also the newly launched SaaS business model will probably make revenues even stickier. They have recently hired people within development and quality control, a sign of confidence in continued growth. 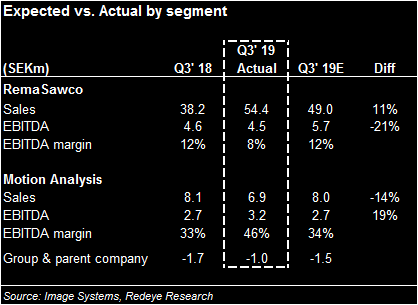 The Bark Beetle ruined the party
Prices for sawn timber has dropped dramatically since the summer. The main culprit is the bark beetle which has attacked large forest areas, primarily in Central Europe. Hence a massive over-supply of timber has hit the market during this fall. Sawmills are now apparently more hesitant to make new investments as can be seen in Image Systems order books. Orders received picked up significant in the last quarter of 2018 and the first months of this year. But has clearly slowed down lately. Book-to-Bill in Q3 fell to 0.4 and Q4 has probably started in a similar way.

Estimates down, but we are still optimistic
We have revised our near term forecasts for RemaSawco while Motion Analysis is virtually unchanged. We are still quite hopeful about the investment sentiment in the sawmill industry. Prices for wood products will probably recover next year as the over-supply abates. The general economic indicators, including construction activity in Europe, are a little weak. But sawn timber is gaining ground over other building materials and will probably continue to do so for a long time.

The actual need for investments in the sawmill industry is difficult to assess. Usually old machinery is considered “good enough”. But in general, Sawmills are not very profitable over a business cycle, unless they are very efficient. Our view is that capex has been rather modest lately. And RemaSawco seems to get good traction for “The Digital Sawmill” that clearly offers higher productivity, less waste and higher quality end-products. Hence we believe demand will pick up and order bookings bounce back in 2-3 quarters.

Going forward gross margins will probably be lower compared to years 2017-18. Obviously since RemaSawco has lower gross margins than Motion Analysis. But also since Motions ambition is to take on turnkey solutions which include some hardware. We expect lower Opex in 2020 vs 2019 following the cost cutting measures that Image Systems announced in the Q2-report. Our updated forecasts suggest an EBIT-level around break even in 2019-20 and then gradually improving. 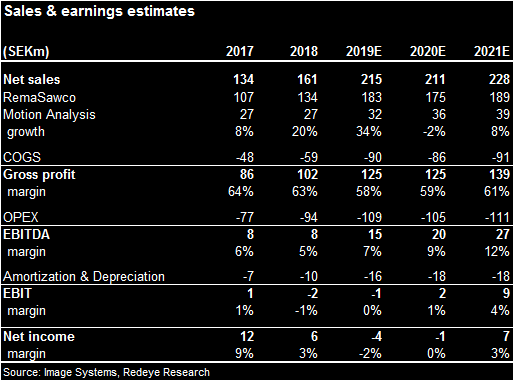 Fair value: SEK 2.2 per share
Based on our new financial estimates we arrive at an equity fair value around SEK 200 million, or SEK 2.2 per share (previously SEK 2.4). Our valuation range remains wide: approximately SEK 1-4. Mainly since the company’s turn-around still has to be confirmed and the near to medium term market conditions are difficult to assess.