Net sales were 11% below our estimate (costs in line) which resulted in a negative EBIT for the quarter. We still believe the Funcom stock is undervalued based on the prospects for the company in the coming years and feel that it is positive that the world's biggest gaming company Tencent think alike.

We expect Conan Exiles to generate the majority of revenue the next 2-4 quarters, with one DLC in Q3 19, 2 DLCs in Q4 19 and a major update planned for H1 2020. As we wrote in our preview the added ability to ride horses called “Mounts” will likely help boosting revenues in Conan Exiles in Q4. According to the CEO-comment in the Q3 report the Funcom Oslo studio continues to focus on the Multiplayer Open World games, further develop Conan Exiles and increase the size of the DUNE game team. The North Carolina studio is in full development with the multiplayer cooperative shooter Mutant Chronicles. 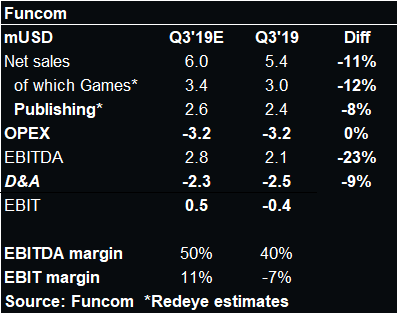 The EBITDA margin was 40% for the quarter and 49% for the last 12 months. The cash flow from operating activities in Q3 19 was USD 2 million. The cash position was USD 16.3 million, the decline from USD 20 million in Q3 18 is mainly caused by significant investments in game development. We believe Funcom still shows strengths with its strong positive cash flow from operating activities during the investment phase.

We will likely only do minor changes in our estimates in our upcoming reserach update.

Pipeline and catalyst for the stock:
Q1: Conan Chop Chop and Moons on Madness on consoles