GiG´s Q4 reports added further details to the already announced numbers in conjunction with the divestment of the B2C segment that we included in our latest note. The Gross Profit came in better than estimated mainly due to a reversal of previous over-accruals of betting duties. The EBIT and EPS were heavily impacted by an impairment of related assets and goodwill in connection to the divestment of the B2C operations. These assets mainly relate to the Betit Group acquisition in 2016. 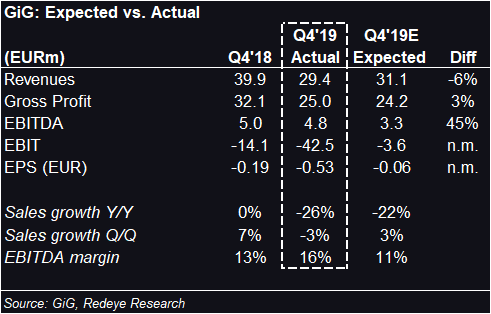 Focus on the B2B segment

Now the company can focus on the B2B operations under a more stable financial position. The revenues for the important Platform Services also came in 20% above our expectations, which is a good signal. However, we did estimate with a higher value for the B2C segment, than the sales price. As a result, we will adjust our fair value.

Following the Q4 report, we will review the case and follow-up with a research update.