The oral presentation of the phase I birinapant combination trial at ASCO 2019 provided some new encouraging data. We look forward to further data later this year and reiterate our base case fair value of SEK 29.

In an oral session at ASCO 2019, we got some further details of the phase I combination trial with birinapant and Keytruda (pembrolizumab) from Merck. As previously announced, in phase I, nineteen patients with advanced solid tumors have been enrolled into four different dose groups (5.6, 11, 17 and 22 mg/m2) and the recommended phase II dose has been set to 22 mg/m2. Data suggest that the combination is safe and tolerable with a limited number of adverse events of grade 3 or higher. Somewhat exciting news in the presentation was that one additional response to treatment had been recorded, which now sums to two patients showing a partial response (tumor shrinkage of >30%). 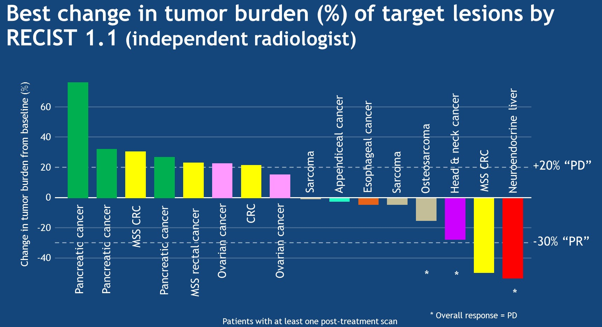 Source: ASCO 2019
Two patients were reported to still be on treatment, one patient with MSS colorectal cancer on treatment for over 80 weeks with a partial response, and one patient with osteosarcoma with a stable disease that has been on therapy for more than 24 weeks. We believe the results are encouraging as this was a phase I trial with the primary endpoint of safety and tolerability, and the study included patients with solid tumors (no specific selection of tumor types).
Change in tumor burden (%), spider-plot

Source: ASCO 2019
All patients in the trial were heavily pre-treated, described in the table below. 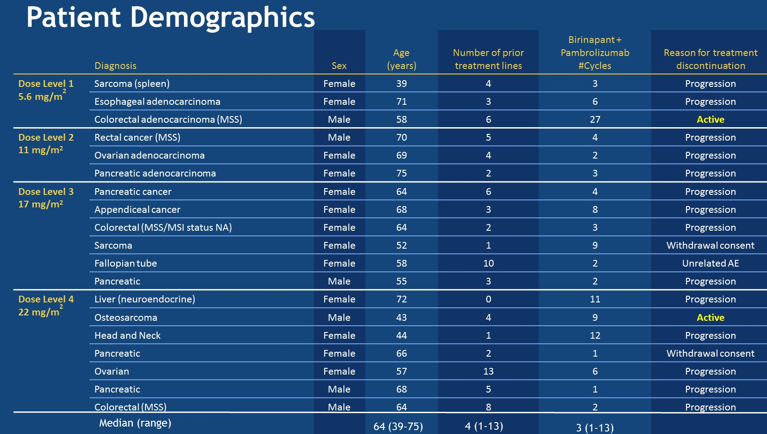 Source: ASCO 2019
The study has progressed into phase II, initiated in December 2018. Primary endpoint is objective response rate (ORR). Patients receive Keytruda and birinapant at a dose of 22 mg/m2 until progression or unacceptable toxicity. Up to 28 patients are scheduled to be recruited. A futility analysis is planned after no more than 14 patients, which is expected in Q4 2019. We believe that even modest response rates with an ORR of ≥5% will probably be enough to justify a continuation of the trial, as these patients rarely respond to PD-1 inhibitors like Keytruda.
All in all, we consider the data presented at ASCO 2019 as promising and look forward to more data later this year.