On Monday June 10 Funcom announced a new Zelda-like indie game called “Conan Chop Chop”. The first gameplay was shown to the public more than two months ago as an April fool’s day joke. We believe the game has great potential for its estimated low budget. In our opinion, it is the most interesting publishing title since Mutant Year Zero.

The game will be released on September 3 on PC, Nintendo Switch, PS4 and Xbox One. It supports 4 players local co-op and reminds us of classic titles such as Zelda and Gauntlet. We think the graphics perhaps is a little bit too childish and could be a potential mismatch attracting a more adult audience with a roguelike approach and somewhat deep RPG-elements. But the impact of certain design choices is often very hard to predict. We do know that this type of nostalgic games have a major audience if the game is good enough.

Similar titles I have a retail price of USD 15-20 which is a likely price point for Conan Chop Chop. In our last research update, we did not know Mutant Year Zero for Nintendo Switch had been delayed to July 30. However, Conan Unconquered seems to sell more than our estimated 26 000 copies according to Steamspy. We have lowered our estimates somewhat for the publishing business in Q2 to USD 3.9 (previous USD 4.1).

With an expected strong sales performance from both Mutant Year Zero and Conan Chop Chop in Q3, we expect net sales of USD 5.3 million in Q3 (previous USD 2.7). 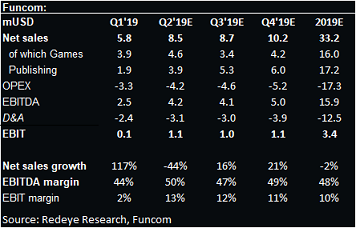