Remedy H1 2019: In a healthy state before release

Revenue was in line with our estimates during H1 2019. Remedy is in a healthy state and hired more personnel during the period than expected. EBIT, therefore, was lower than our estimates. As we discussed in our initiating report, Remedy has started to capitalize development in its own projects. This will make it easier to compare the company valuation to peers. Remedy also stated that early negotiations have started with potential business partners for two own projects in its pipeline. We believe Sony is one of them as we wrote a few days ago.

Control will receive significant visibility on PlayStation marketing channels and the Epic Games Store, thanks to agreements made with respective parties.

Control’s marketing has kicked into a higher gear, gaining good exposure in key industry events such as GDC and E3, where the game received 24 nominations and 12 awards including best game of the show from Gamespot (one of the leading gaming websites).

Remedy finalized the first Crossfire game project with Smilegate during the second half of 2018, and soon after that in October continued the cooperation with a new Crossfire project, which is now in production.

Remedy’s third unannounced game project, as well as the Vanguard project, have progressed further with small early phase teams. Early negotiations with potential business partners have also started, and the company are in a financially strong position and want to retain stronger business control of its own games, management is not in a hurry to sign business partnerships for own new games.

The cash position remained strong, with EUR 21 million at the end of the period under review. 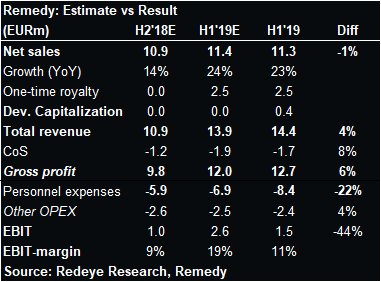 It’s noteworthy that Remedy’s operating profit benefited from the one-time royalty income and the start of product development capitalization.

We believe Remedy has a golden opportunity for a successful release of the game Control. The release window looks promising, with a longer period behind us without any major releases. No major third-person action adventures will either be released for a few months after the release. Two of the biggest players in the industry, Sony and Epic will do a strong market push for the game.

The only uncertainty, for the time being, is how good the game is. With a Metascore above 80 Remedy and its publisher, 505 Games have a good chance to sell somewhat above 1 million copies in 2019 we believe. For fans of third-person action games, Control, Death Stranding (release date November 8) and Star Wars Jedi: Fallen Order (release date November 15) are the most anticipated games the second half of 2019.

Remedy has EUR 21 million in cash. If the game Control becomes successful, we expect a highly lucrative deal for at least one of the own projects in the pipeline. On the other side of the coin, if the game becomes a commercial failure Remedy will still be in a financially strong position.