Stillfront Group: Insider is selling, but data support our view

Stillfront’s largest shareholder sold today a substantial post in the company. We have a favorable view of the company, but when an insider is selling, it’s always good to do some extra legwork and analyze the numbers yet again. After looking into the latest data available, we feel confident in our projections and continue to regard that an 11.5x EBIT multiple is attractive for a company like Stillfront.

After looking at the latest third-party data available, we see no reason to make any forecast adjustment for Q3. The quarter will be affected by seasonality, but that is already something we already accounted for in our estimates. The big add during the quarter will be KIXEYE. We expect that the EBIT during the next twelve months (NTM) will amount to SEK 713m, which can be compared to the trailing twelve-month (TTM) EBIT of SEK 453m. The EBIT will increase due to sustainable improvements in monetization we saw during Q2, but also thanks to the KIEXEYE acquisition, which is consolidated from Q3 and onwards. The company is currently valued at roughly 11.5x EV/NTM EBIT. Historical EV/ TTM EBIT levels have ranged between 11x-33x, we regard an 11.5x multiple as attractive for a company of Stillfront qualities.

Some comment on the latest development and the data we have collected:

For Core products, excluding KIXEYE, we expect to see a Q/Q drop of roughly 13%. New data that we have collected supports our projections.

The largest product within Core is Nida Harb III. Q2 was a record quarter in-terms of Deposits, driven by strong live-ops and the Ramadan holiday. Looking at average gross ranking during the past months and weighting that to the “value” of the country, the iPhone Grossing has indeed declined somewhat compared to Q2. Currently, the ranking score seems to be on about the same phase as Q1, something we expected to see. We believe that deposits during Q3 will land in the region of SEK 55-65m. 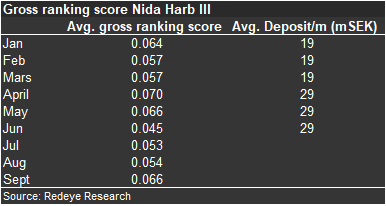 Strike of Nations is the global version of Nida Harb III and one of the largest products within Core. During Q2 the game had deposits of SEK 17m. We have looked into the gross rankings for the game within its core markets; USA, the UK, Germany, etc. And by the look of it, the ranking seems stable. Q3 always have a seasonality effect to it, but overall, we expect to see stable deposit levels for the game.

Shakes and Fidget is the second-largest product within Core. It’s harder to create an estimate for the game based on app ranking, as there is a significant browser component also. Overall the app ranking and site traffic seem to hold up well, and we do not expect to see any larger surprises there.

We have limited data on KIXEYE, as their biggest platform is Facebook, but we have a rather conservative estimate, to begin with. For example, we model a 20% drop compared to the Q1 revenue figure with lower profitability. As such, we feel confident that the newest addition to the Group will reach our expectations.

For Big and Empire, we expect to see a Q/Q drop about 12% during Q3 compared to Q2. The main reason for the decline is seasonality and that the marketing is spent on higher ROI titles within the Group.

During Q2, we saw record monetization levels within the Goodgame brands. The best data we can use is to look at third-party site traffic on the larger game’s login sites. The traffic data is not reliable on the absolute number but should be a relatively good proxy for the trend in traffic, which shows a slow decline. As always Q3 is affected by summer seasonality. The traffic does not, however, say anything about monetization, which reached a record level in Q2, as such we believe that the main driver will be stable ARPU and not user growth. 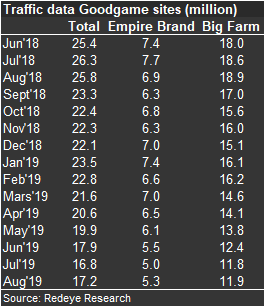