Enlabs will release its quarterly report on the 30th of Jan. The fourth quarter is historically Enlabs strongest quarter, and we estimate with a rapid Q/Q growth. Furthermore, the Enlabs finalized a strategic acquisition in Belarus that doubles the company´s targetable market.

We are expecting a strong finish of a successful year. The fourth quarter is historically Enlabs strongest quarter, and we estimate with a rapid Q/Q growth of 13%. We made some minor down adjustments of our Q4 estimates after the Q3 report due to the lower number of active players than expected. However, we regard our estimates as moderate and see a large chance of over-performance in the fourth quarter. We expect the product improvement during the year to be vital growth drivers, especially the addition of Evolution Gaming in Latvia. Moreover, we believe that the reported low betting margins in Q4 by several competitors (both public and private) will have a limited effect on Enlabs, due to different betting exposure.

We estimate that the EBITDA margin will reach 31%, which is slightly lower than last year. The lower margin is mainly driven by the increased marketing investments in Lithuania, which will fuel growth in the coming years. The underlying scalability is, however, strong as sales are growing much faster than other OPEX. 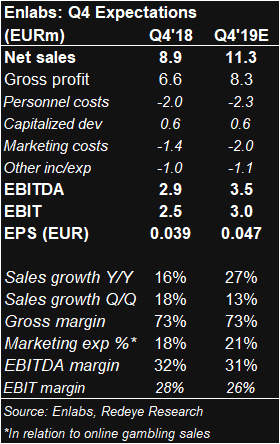 As mention in our previous note, the strategic acquisition in Belarus, on 26th of Nov, is doubling Enlabs targetable market. Moreover, with a population of 9.5 million, the population is about three times as large as the population in Enlabs existing core markets, Latvia and Estonia. Enlabs also communicated that it expects to launch its flagship brand, Optibet, in H1 2020. However, just as for Lituania, we expect that it will take time before Belarus becomes a major growth driver for Enlabs. 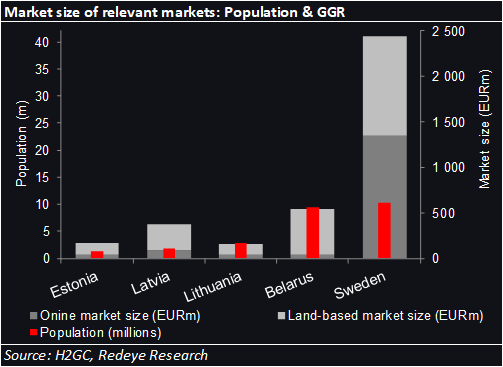 We expect that Enlabs will continue to have a strong cash flow and an impressive cash conversion ratio in the fourth quarter. The conversation ratio from EBITDA to Net profit is far above the industry average, and the cash conversion ratio (Net profit to Operation cash flow) is also above the industry average. Resulting in an impressive improvement of the company´s cash position each quarter.

The strong financial position has enabled Enlabs to seek M&A opportunities actively. However, we expect the company to continue being selective to ensure value-adding acquisitions.

Enlabs share price has increased by more than 15% the past month, which has increased the valuation multiples. We, however, still view Enlabs as attractively valued with an EV/Net profit multiple is 16x for 2019E and 11x for 2020E. We estimate that Enlabs will grow around 30% annually in the next two years, which can be compared with the consensus for its peers of around 10% annual growth.

All in all, we expect a strong Q4 with strong growth and new all-time highs. The outlook has improved further with the acquisition in Belarus that doubles the company´s targetable market. Despite the strong development of the share price, we still regard the share as attractively valued.

We will get back with a comment following the release of the report.