Redeye updates on Evolution post Q2-results which came in slightly lower than expected. While we trim our estimates (2022-24E EBITDA down c. 2-3%) due to slower than expected growth in Asia, we are positive to the solid growth in US and the increased share of regulated revenue.

Evolution’s Q2-results came in close to our expectations with revenue c. 1% below and EBITDA c. 2% below our estimates. The lower-than-expected revenue was largely due to Asia which grow slower than expected, however, North America on the other hand grew stronger than expected which helped to increase the share of regulated revenue to 43% in the quarter from 40% in Q1 22. With North America becoming a larger share of the mix there is potential to increase the share of regulated revenue additionally which we believe this should be positive towards the risk perception of Evolution. We were also encouraged to see that RNG revenue came in stronger than expected and with the announced acquisition of Nolimit City there should be potential for improved growth in the segment forward.

Coming to the outlook, the company reiterates its guidance of an EBITDA-margin of 69-71% for the full year. Regarding the strong performance in North America, Evolution comments that most of the increased capacity in the region was added in the end of the quarter suggesting continued growth potential in H2 22. Growth in H2 is also supported by the game release roadmap where more than half of the years planned games are coming in H2.

Overall, we make limited estimate changes on the back of the report. We have shifted our growth mix more towards North America while we have lowered our growth expectations for Asia which continues to see a growth deceleration. We have also increased growth estimates for RNG on the back of stronger than expected growth in Q2 coupled with the acquisition of Nolimit City which we assume will be closed in Q2.
In summary, we lower our revenue estimates with 1-2% over 2022-24E while EBITDA-estimates are down 2-3% for the same period. We leave our valuation range unchanged with a base case of SEK1,600 while the bull case remains at SEK2,600 and the bear case at SEK1,100. We have updated our Redeye Rating on Evolution on the back of an update to our rating model and the new ratings are: People 5 (5), Business 4 (5) and Financials 5 (4).
Evolution currently trades at c. 15x EV/EBITDA 2023E which is in the low end of its historical valuation range. The has performed weak in 2022 despite a continued positive EPS estimate trend suggesting an attractive entry point in our view. 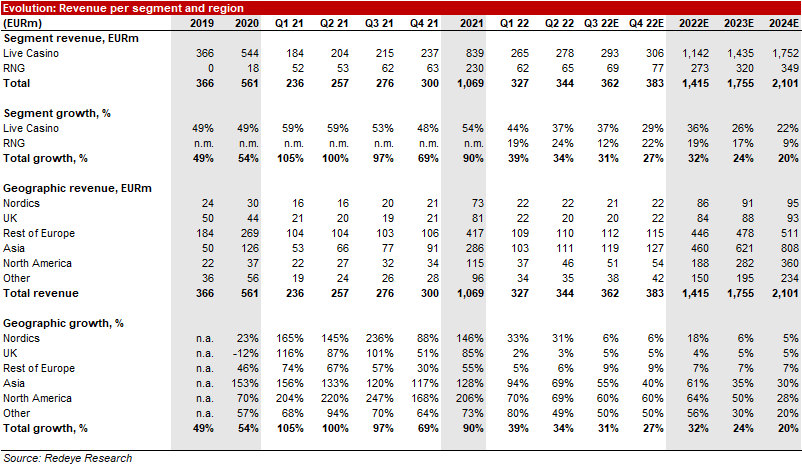 Unlock to get access to a deeper layer of research on Evolution Gaming Group.

Follow to get an email when we publish research on Evolution Gaming Group.

Unlock to get access to a deeper layer of research on Evolution Gaming Group.

Follow to get an email when we publish research on Evolution Gaming Group.