Redeye updates its estimates on Starbreeze. Due to the strong dollar exposure, and relatively high player engagement in Payday 2 we have raised our estimates for the second half of 2022. We are also convinced that Starbreeze’s focus to publish external games with a “Games as a Service” business model is wise, due to its proven track record within this space.

October 6, Starbreeze announced it returns to external publishing. The company will exploit its knowledge and proven track record in the business model “games as a service (GaaS)” in its publishing investments. We think this is a good strategy because Starbreeze’s proven GaaS expertise is probably its best competitive advantage in the competitive publishing arena.

Highly exposed to the dollar

We have raised our net sales estimates due to a strong dollar in comparison to the Swedish krona. We know that Starbreeze is highly exposed to the dollar. Since the end of 2021 USD/SEK is up 20%. This means we estimate the year-over-year organic growth excluding FX effects is negative. However, 2021 is a hard comparison year due to the market efforts and content releases connected to the 10-year anniversary of Payday and a Covid-19-related sales boost.

Our new full-year estimate for 2022 is SEK123m (SEK99m), meaning a negative growth of 2% year-over-year. Net sales during Q3 have been raised to SEK34m (SEK26m). We have only made some minor changes in our estimates for 2023 and 2024. For example, admin costs have been increased due to the incentive program. Currently, we will not make any changes to our fair value range of SEK0.8-5 per share.

Masters of “Games as a Service”

Starbreeze has shown that the company can create recurring revenue from a loyal fanbase for a long period of time twice, both with Payday 2 and through the publishing success Dead by Daylight. With the release of the much awaited Payday 3, ten years after its forerunner, Starbreeze has a good chance to continue the successful journey with the Payday-franchise. Starbreeze has also started initiatives to develop a new game planned to be released in 2025 and re-launched its publishing unit.

Payday 3 will be released in 2023. Unlike its predecessor, it will be a multi-platform release which is expected to increase sales. Other significant drivers for higher sales are the brand’s increased strength since 2013, a higher development and marketing budget, and a significantly larger gaming market. When all direct costs are taken, we expect Payday 3 to give a gross profit of approx. SEK 400 million in 2023. If Starbreeze manages to maintain high recurring revenue in the coming years after launch it will create significant shareholder value.

Payday 2 has generated net revenues of more than SEK 1.1 billion to Starbreeze in less than eight years. An interesting aspect is that Payday 2 brought in “only” SEK 120 million in net income during the initial period after launch (in this case four and a half months) which shows how well Starbreeze manages the business model “Game as a Service”.

Key personnel have left the building

The success of Payday 3 ultimately is decided by the quality of the game, and how well it manages to serve loyal fans as well as create new ones. We would of course be more confident in the quality assurance if more original creators were still operative in the company such as key game designer Ulf Andersson. An incentive program connected to the quality of Payday 3 creates some conviction that the game will be good at launch.

Starbreeze has no active major shareholders. Due to very bad risk management historically that ended in reconstruction in 2018, no founders, active personnel, or manager of the board have a significant shareholding. This, of course, weakens the incentives in the company to build great shareholder value.

High dependence on one game launch

The convertible loan and related liabilities to Digital Bros amounted to almost SEK 350 million (according to the Q2-report 2022). The enterprise value of Starbreeze is therefore approximately SEK 1 billion, when it is traded at around SEK 0.9 per share. The commercial result of Payday 3 is of course very important for the valuation of Starbreeze, but we argue the risk is significantly lower than in 2018 (the release of Walking Dead-game), due to a stronger balance sheet. We assume Starbreeze is likely a takeover target after the release of Payday 3.

October 6, Starbreeze announced it returns to external publishing. The company will exploit its knowledge and proven track record in the business model “games as a service” in its publishing investments. We think this is a good strategy, it is of course an important to find a competitive advantage in the competitive publishing arena.
Starbreeze’s most impressive accomplishment is the publishing success of “Dead by Daylight”. The game was released in cooperation with the Canadian developer “Behaviour Interactive” with a “games as a service” business model. The game was released in 2016 and has as we understand it shown revenue growth ever since. On a daily basis the game is often amongst the top 20 best sellers on Steam, the biggest PC platform. In 2021 for example, the game was one of the twelve best sellers on Steam, five years after its intimal launch, in good company with games such as Rainbow Six Siege, GTA5 and Valheim. Starbreeze however sold the publishing rights of “Day by Daylight” in late 2018 to improve its short-term financial stability.
The first game in its publishing game portfolio is a small, indie game called “The tribe must survive”. The game is a strategy tribe-builder with survival and roguelike features. Set in an unforgiving Lovecraftian stone age, players must find ways to grow and protect the tribe from what lurks in the surrounding shadows.
The developer of the game “Walking Tree Games” was founded in 2021 by two friends with a combined 23 years in the game development industry. A brief demo of the game was released on Steam in February this year and was downloaded over 4.8 thousand times, with the full game being wish-listed by more than 6.7 thousand players.
Starbreeze will support marketing, community management and platform relations, while also providing funding for the game development. The publishing agreement with Starbreeze is pending due to the fact that the developer gets funding from the German federal games industry-funding programme. The full game is scheduled for early access launch in 2023 and full launch in 2024.
Starbreeze has a relatively stable cash position and cash-flows due to its publishing agreement with Koch Media and recurring revenue from Payday 2. We assume Starbreeze will not sign any major publishing agreements financing development costs from external studios until Payday 3 has been released. Starbreeze cash position of approximately SEK90m is solid, but not that solid. However, we expect Starbreeze has the ability to considerably bigger publishing deals than this one.

Comment on the Q2-report
Starbreeze Q2 report was stronger than expected. The development of Payday 3 progresses according to plan and the goal to develop and release a new game within a new IP in 2025 persists. It is soothing that Starbreeze strategy is to continue releasing games with a “Games as services” model which is a core strength within the company.
Our lowered estimate from SEK33m to SEK21m, following the weak Q1-report was unnecessary. Net sales in Q2 of SEK 31.8m is a strong sign that Payday 2 continues to attract players still. The console version of the game generated a larger share of total sales than the previous year during the first half of 2022 (SEK9.8m). EBIT turned positive which was also our previous expectation before the Q1-result. The quarterly result was positively impacted by the strong dollar exposure. 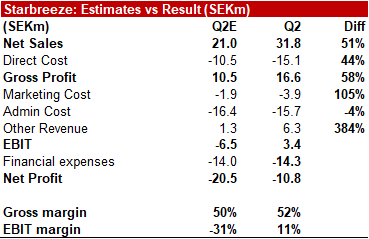 We have raised our net sales estimates due to a strong dollar in comparison to the Swedish krona. We know that Starbreeze is highly exposed to the dollar. Since the end of 2021 USD/SEK is up 20% based on the current dollar level. This means we estimate the year-over-year organic growth excluding FX effects is clearly negative. However, 2021 is a hard comparison year due to the market efforts and content releases connected to the 10-year anniversary of Payday and a Covid-19-related sales boost.

We have raised our full-year estimate of 2022 to SEK122.9m (SEK99.2m), meaning a negative growth of 2% year-over-year. Net sales during Q3 have been raised to SEK33.6m (SEK26m). The top line estimate for Q4 is SEK34.1m (SEK28.7m). We estimate an EBIT of SEK-12.3m (SEK-26m) in 2022.
According to our source Steam DB, concurrent users was 24% higher in Q3 2022 compared to the same period last year. Quarter-over-quarter concurrent users increased by 16% according to the same source. However, we only have a few data points to rely on and the correlation is sometimes poor between concurrent users and revenue. We will therefor not make any significant adjustments due to this strong engagement numbers.
We have only made some minor changes in our estimates for 2023 and 2024. Admin costs have been increased due to the incentive program in 2023 to SEK76.1m (SEK63.1m) which has impacted our EBIT estimate from SEK303.8m to SEK286.9m.
Currently, we only know about one game in the pipeline of Starbreeze’s newly re-launched external publishing unit. The game called “The Tribe must survive” is considered an indie title with a planned so-called “early access” release in 2023. Currently, we will not include any estimates in 2023 and 2024 from the publishing unit due to uncertainties both in the publishing pipeline and Payday 3 sales.
We have also noticed that the mobile game called Payday: Crime War, developed and published by an external company, is still under production according to Starbreeze’s website. The delay of the game has no impact on our short-term estimates, because we expect only minor royalties from the game, so small it is not a revenue driver in our financial model at the moment.

Unlock to get access to a deeper layer of research on Starbreeze.

Follow to get an email when we publish research on Starbreeze.

Unlock to get access to a deeper layer of research on Starbreeze.

Follow to get an email when we publish research on Starbreeze.